Does this pocket need a park?

People need plants and fresh air to live happy and healthy lives. That concept fueled city planning strategies in fits and starts through the ages, but the results are as uneven as the applications. We see you, urban parks, and we love you, but are there enough of you?

If we want more parks in Orlando, what are we to do?

We know the city is committed to our green spaces, evidenced by the $6 million it spent to save Constitution Green and its 175-year-old oak tree in South Eola, near the Central Business District. The city stepped in when the tree was about to be cut down to make way for condos. Holding on to and increasing park space in our city is no simple matter. People have been moving to Orlando in droves and residential infill projects abound but the question persists if we can realistically foster hope that all residents will have access to nearby green spaces for the long term.

One answer comes in the form of an intervention already seen emerging in U.S. cities: pocket parks. A pocket park, also known as a “parkette,” or “mini-park,” is a small park accessible to the general public that is frequently created on a single vacant building lot or on small, irregular pieces of land. And it isn’t a new concept. New York City has been creating pocket parks since 1964 when a group called The Park Association of New York City organized to transform empty lots into usable places, rather than ignored spaces.

In Austin, which now supports green space initiatives that has pocket parks popping up all over the city, a space along Congress Avenue, a Main Street district, has reimaged this space: In Orlando’s neighborhoods, we should view nooks, crannies, and alleyways as potential park spaces, not to be overlooked. I’m particularly interested in what is happening with development in The Milk District.

As a downtown Orlando Main Street, the neighborhood is an ideal candidate for this sort of treatment. It’s only two miles away from the Central Business District, it has a growing retail sector, a historic residential neighborhood with gridded streets, and limited room for growth. Prioritizing and setting aside green space now will be key to the overall health of The Milk District as it grows into the future.

There are a number of irregular parcels of land throughout the neighborhood where green space would be a welcome respite from the concrete jungle, especially on streets that are predominantly lined by businesses and those that feed into the adjacent residential streets.

Interstruct design, with its focus on adaptive re-use of historic buildings, good design, and community-centered development, is committed to seizing opportunities like the installation of pocket parks in our growing urban neighborhoods to increase access to green space and the strengthening of Orlando’s downtown core.

Interstruct is dedicated to Central Florida’s neighborhoods and we occasionally use our blog, social channels, and email to illuminate exciting developments and opportunities in the region. We also invite guest writers to contribute to the conversation, like Brendan O’Connor has in this blog post. 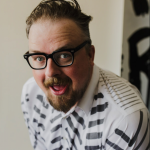 Brendan O'Connor is the Editor-in-chief of Bungalower, a hyper-local news company operating as a social enterprise focused on building stronger cities by informing and engaging people with their city.